Chen Shuxiang: Life and Death Penetrating through the Paper Back 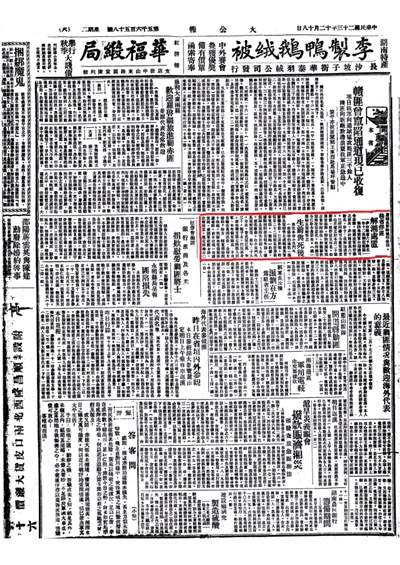 From December 15 to 21, 1934, Changsha's Ta Kung Pao published four pieces of news, covering the news about Chen Shuxiang (Xiang) 's capture, sacrifice, and overhanging Wumen. This is a copy of the newspaper in the Provincial Archives. Photo courtesy of Hunan Provincial Archives

"Except for Chen Shuxiang, the puppet master. More than 1,680 bandits have been captured ..."

"Chen Shuxiang was originally named Shuchun, a native of Changsha, living in Chen's house on Wawu Street outside Xiaowumen ..."

The newsprint of that year has now become a historical archive. Recently, the reporter saw copies of these old newspapers in the Archives of Hunan Province. According to the person in charge of the editorial department of the Provincial Archives, this may be the earliest media report on Chen Shuxiang.

Through the black and white text, the reporter echoed the vow of the broken-hearted general "to shed the last drop of blood for Soviet New China".

Before his death: He grew from a vegetable farmer to a commander of the Red Army.

"Formerly known as Shuchun. She lives in Chen's house on Wawu Street outside Wumen, Xiaowen. She is twenty-nine years old. Her mother is here. His wife is Chen Jiangying. She is thirty years old. She has no children. Teacher ... "

Chen Shuxiang was born in 1905 in a farmer's house in Fulin Town, Changsha County.

The "Six Points of Tanshan Chen Family" preserved in the cultural station of Fulin Town, Changsha County clearly records information such as the name of Chen Shuxiang and his son, the year of his birth, and other information: "Zhengke, the word Jianye." , Zi Zifeng, No. Shuchun, also known as Shuxiang, was born on the 30th day of the first month of the thirty-first year of Guangxu in the Qing Dynasty ... "

"The people in his hometown are Chen Shuxiang's" spring sister-in-law ". He has worshiped Su Wujie's unyielding since childhood and admired Yue Fei for his loyalty to the country." Feng Shengqi, the founder of the Chen Shuxiang Martyrs' Troupe of Changsha County, told reporters that his grandfather was Chen Shuxiang's childhood playmate. He often listens to Grandpa's story about Chen Shuxiang.

In 1914, Changsha suffered a severe drought. The 9-year-old Chen Shuxiang fled with his father to Chen Jiayu outside Xiaowumen, Changsha, and lived on renting land to grow vegetables, sell vegetables, and help cooks.

Because he often went to the Qingshuitang to pick up water and deliver vegetables, Chen Shuxiang met Mao Zedong, He Shuheng, and others in 1921, and embarked on the revolutionary road.

After numerous baptisms in battle, Chen Shuxiang grew from a company-level cadre to a senior commander of the Red Army and fought many hard battles and victory.

In March 1934, Chen Shuxiang was appointed head of the 34th division of the Red. In October, the Central Red Army began the Long March. Chen Shuxiang led the Red Thirty-fourth Division to take on the task of guarding the whole army, covering the main forces of the Red Army and the Central Committee of the Communist Party of China and the Central Military Commission, and fighting frequently with the enemy.

Changsha's Ta Kung Pao recorded the battle between Chen Shuxiang and the Kuomintang troops in the Xiangjiang River: "Because they covered the river and were cut off by the National Army, they returned. Now they are in a regiment of 100, with only five heavy machine guns and three automatic rifles ... ... "

Chen Shuxiang led the division and fought fiercely for four days and five nights with enemies more than ten times his own. In the end, the army ran out of food, Chen Shuxiang was shot in the abdomen, and was wounded and captured.

Changsha's Ta Kung Pao reported: "Captured Chen Shuxiang, a pseudo-34th division commander ... departed from Jiangxi Xingguo, and was defeated by the national army ... After being dispatched to Shimaqiao, he was killed by injury ..."

Behind the four words "Death due to injury" is Chen Shuxiang's tragic death. When he was escorted, Chen Shuxiang took out his intestine from the abdominal wound while he was unprepared. He was severely severed and sacrifice. He was only 29 years old.

After death: No child, there are countless "descendants"

"Pseudo-Thirty-Fourth Division Chief Chen Shuxiang will be at the first level. He will be hung on the stone lamppost at the Zhongshan intersection outside Xiaowumen in a storage cage. Show public ..."

After Chen Shuxiang's sacrifice, the enemies offered their rewards for mercilessly, and severely cut off their heads and sent them to Changsha to hang at the gate to show the crowd. Daoxian people buried his headless body and the sacrifice guards on the slope beside Xiaoshui.

Although Chen Shuxiang did not leave any children, he has countless "descendants" and has been remembering and inheriting his spirit.

"Who said that our big dad, Chen Shuxiang, has no descendants? Our whole family is the descendants of Chen Shuxiang." Founder Lieutenant General Han Wei's son Han Jingjing told reporters that his father had fought side by side with Chen Shuxiang, forged a profound revolutionary friendship.

In 1992, General Han Wei told Han Jingjing before death that he must find his descendants. For more than 20 years, Han Jingjing has brought his wife and children to Hunan several times, looking for the home of the big dad, and visiting the remains of the 34th division of the Red Army.

"He didn't even have a nephew or nephew. The" head portrait "that is still alive is based on an oral dictation of my father, and he invited an artist to paint it." Han Jingjing said that the portrait was obtained by Chen Shuxiang's former comrade-in-arms and major general Zhang Lixiong's approval.

"Our sons and grandchildren of Fulin are also descendants of Master Chen!" Said Huang Long, secretary of the general party branch of Fulinpu community in Fulin, and the heroic deeds of Martyr Chen Shuxiang have been extolled by his hometown. His revolutionary stories continue Discovered.

In the warm sun in winter, three or five groups of tourists came to visit the Chen Shuxiang Martyrs' Deeds Showroom and Shuxiang Cultural Square in Fulin Town to admire the martyr.

Feng Shengqi recalled to reporters that once, there were many tourists visiting Chen Shuxiang's former residence near his home. The daughter of middle school asked him if there were any stars to come to the concert. "At that moment, I had mixed feelings. In my opinion, Master Chen is the star of the times, and he is the best idol of the younger generation. "

In recent years, many hometown neighbors of Feng and Chen Shuxiang's hometowns have embarked on the road of pursuing red footprints.

At the corner of Shuxiang Cultural Square, there is a memorable wall named "My 29-year-old" filled with post-it notes by visitors. Vigorous or agile fonts record the thinking of contemporary young people: "Same as 29 years old, different times, same responsibilities." "Who has not died since ancient times, leaving his heart to shine." "Wai Si martyrs deeds, inherit the red spirit . "...

On the cultural square, the design of the gun Lin Danyu in the war years was designed, and Chen Shuxiang's statue was staring at the red door of rebirth. Nearby, the children were playing in the playground.