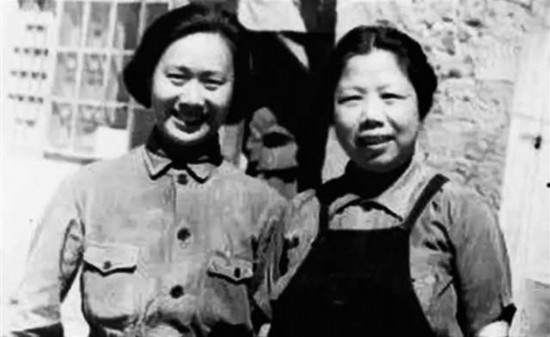 One day in June 1938, a message came out from the home of patriotic democracy activist Kang Xinzhi: his second daughter Kang Yansha, who was under 20, disappeared! Shortly afterwards, another news came out: Kang Yansha left Miss Qianjin to leave, and left for Yan'an to join the Communist Party.

Why Kang Kangsha gave up her life in Jinyiyushi and went to Yan'an? On December 19, Li Hong, deputy research librarian of the Wenbo of Chongqing Hongyan Link Cultural Development Management Center, gave an explanation in an interview with a reporter from Chongqing Daily.

Kang Yusha, born in February 1919, his father Kang Xinzhi was a well-known national capitalist in Chongqing, and he was close friends with Yu Youren, Shao Lizi and other top Kuomintang people. Located in No. 10 Consular Lane in the urban area of Chongqing, the "Kuan House"-Kuantingkuoyuan is well known.

"Because of his good family, Kang Yusha has received a good education since he was a child." Li Zheng introduced that after graduating from Beiping Primary School, Kang Yusha went to Shanghai to attend middle school. She never thought about Lugouqiao ’s gunfire interrupting her dream of studying, and her father Kang Xinzhi was worried, so he hurriedly returned Kang Yusha and several other children to Chongqing. Kang Yusha was sent to the second female division (Sichuan Li Girls' Second Normal School) on loan.

"The female second division is a relatively progressive school. The anti-Japanese sentiment of teachers and students is high. Kang Yusha was influenced by teachers and classmates, and gradually took the road of resisting Japan and saving the country, and actively participated in the school's salvation publicity activities." The outstanding performance attracted the attention of the CCP's secret organization in the school. Under the active guidance and training of the party organization, on June 1, 1938, Kang Yusha gloriously joined the Communist Party of China.

After joining the party, Kang Yusha was exposed to some basic revolutionary theoretical knowledge, but she was not satisfied. Later, she read the newspapers and newspapers from Yan'an, and the opinions and opinions mentioned therein made her very admired. She felt more and more that her current living environment was full of restraint and depression. The most painful thing is her contradictory relationship with the family-her daily life cannot be separated from the family, but the family itself is the object of revolution.

So Kang Yansha decided to go to Yan'an, a revolutionary sacred place, to undergo training in a difficult environment, and transform himself from Miss Qianjin into a strong revolutionary fighter.

The family objected to her decision, and Kang Yusha's father even forced her to sever the relationship between her father and daughter. In the end, Kang Yansha decided to run away from home. She arrived in Yan'an at the end of June 1938, and quickly adapted to the new environment, devoting herself to the intense study life.

Use your identity to return to Chongqing for united front work

One day in the summer of 1939, Deng Yingchao found Kang Yusha and told her an unfortunate news. After Kang Yusha left, her grandmother died, and her mother was bedridden because she was worried about her illness.

This news made Kang Yansha unacceptable for a while. Deng Yingchao comforted Kang Shasha and said to her, "Your father has repeatedly asked Enlai and Lao Lin (Lin Boqu) to tell our family to miss you. He wants us to send you back. What do you do?"

At this time, Kang Xisha was stunned, and the death of her close relative at home made her heartache. She missed her loved ones very much, but when she thought of going back to be a "cold-blooded person" who ignored the peril of the nation, Kang Yusha said firmly, "I just want to go forward to resist Japan, and I don't want to go back to the home in Chongqing."

"Of course you are staying in Yan'an to study, work, or go forward. Of course, it is also very good. But, have you ever thought that if you go back to Chongqing to work, do you have more advantages? You can use your family and social relations to work. Deng Yingchao's words made Kang Mao Sha Mao set off.

In May 1940, Kang Yansha returned to Chongqing from Yan'an with Zhou Enlai. The party organization demanded that she continue to be a Miss Qianqian on the surface, while carrying out the united front work on the surrounding people, and make use of the favorable conditions of family and social relations to do everything possible to understand the relevant situation within the Kuomintang and the interests and contradictions within the ruling class. Conflicts, etc., are not reported directly to Zhou Enlai on a regular basis.

At the same time, Zhou Enlai and Deng Yingchao also expanded the scope of the united front work through Kang Yusha: they met Yu Youren and Shao Lizi, who lived in Kang ’s family for a long time, talked with them about current affairs, and promoted our party ’s "United Anti-Japanese" progress and sought their understanding and understanding. Support; they invited Kang Xinsha's uncle Kang Xinyuan (general manager of Baofeng Company) and his aunt (Kang Xinsha's aunt and Deng Yingchao are close friends of Tianjin female teacher) to have a light meal to stimulate their patriotic enthusiasm, hoping that they will be conducive to the War of Resistance Progressive businessman.

Gradually, the "Kang House" at No. 10 Consular Lane in Chongqing became a gathering place for democrats. Here, the "China Democratic Revolutionary Alliance" was formally established, and a large number of patriots, the Kuomintang left and higher positions in the Kuomintang government Progressives have united around the Communist Party.

Become the first generation of female diplomats in New China

In 1941, Kang Xinzhi was reassigned to Chengdu, Kang Kangsha transferred to the Economics Department of Guanghua University in Chengdu to continue to use his own advantages to collect intelligence for the party. Everything was calm, but Xia Kangyingsha was arrested accidentally in 1943.

On a Saturday in 1943, Kang Yansha returned home from school by rickshaw as usual. When he was about to reach Qingyang Palace, two men were suddenly dragged from the car into a car and blindfolded her. Transferred to a heavily guarded and heavily guarded prison.

When Kang Yansha opened his eyes again, he had reached the dark and humid prison. At this time, she finally understood that this was not a kidnapping, but an arrest by KMT agents.

"Kang Yusha's activities in Chengdu have long been watched, but due to the environment of the Kuomintang-Communist anti-Japanese war and the social influence of his father Kang Xin, the secret agent easily dared not to take action." Li Zhi introduced, in 1943, the international situation After the change, the Communist International disbanded, the Kuomintang took the opportunity to clamor for the CCP to hand over military and political power, and the domestic situation became extremely tense for a time. "Object.

In the face of the locked prison door and multiple interrogations in the prison, Kang Yansha insisted that he was a student studying at Guanghua University, and he knew nothing else. The Kang family learned that her daughter had been missing since she left school, and asked around to find out, and entrusted Kang Yusha's uncle Li Boshen (then Secretary-General of the Sichuan Provincial Government) with a personal life guarantee, before holding Kang in prison for more than a week. Yansha rescued.

The Kuomintang has added Kang Yusha to the "black list", and the special committee of the province will conduct training on all actions after her release from prison, such as "you must not leave Chengdu for 40 miles without approval"; you must go to the designated place on time and as required Report the situation and report "learning experience", otherwise Kang Yansha will be in danger of being arrested again.

After the organization instructed, Kang Shasha transferred to Yanjing University to study. However, due to her failure to report to the Kuomintang's requirements, the KMT's secret service finally lost her patience and sent her two similar warning letters within a few days, asking Kang Yusha to be in late June 1944. One day, I went to a place to report my thoughts. If I didn't show up, I would take the consequences.

To ensure the safety of Kang Yusha, the party organization decided to send her back to Yan'an. In February 1945, Kang Yusha finally returned to the embrace of the Party Central Committee.

After the founding of New China, Kang Yusha has served as a senior diplomat of the embassies in Indonesia, Cambodia, Romania and other countries. He has actively contributed to the diplomacy of New China and became the first generation of outstanding female diplomats in New China.

"Kang Shasha was brave to get rid of the constraints of the bourgeois ideology and living environment, pursued his heart, and gradually grew into a strong proletarian fighter in the baptism of revolutionary struggle." Li Yan said that today, every one of us must learn Kang Yusha's spirit of self-revolution persisted in self-purification, self-improvement, self-renovation, and self-improvement to ensure the purity and advanced nature of the party.