"Make a look for the whole country"

Original title: "Make a look for the whole country" 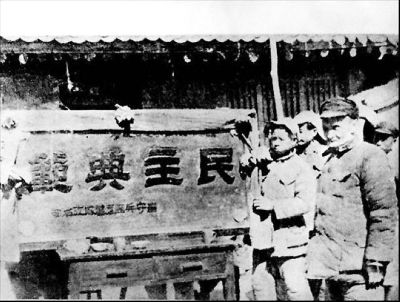 In November 1941, Li Dingming, a well-known patriotic democracy activist, put forward a proposal for "smart troops and simple administration." On December 17, the Central Committee of the Communist Party of China issued an instruction on "smart administration and simplified administration". This policy has been actively implemented in Shaanxi, Gansu, Ningxia, and other base areas, and has achieved good results. The picture shows Li Dingming (first from the right) on behalf of the Border District Government accepting the "model of democracy" plaque presented by the Eighth Route Army left-over corps.

During the Yan'an period, the Communist Party of China, in addition to leading the general public to adhere to the anti-Japanese national united front, actively promoted the great project of party building and achieved fruitful results. It also made great achievements in the construction of the regime and the standardization of the governance system. Accumulated useful experience.

Formulate the highest policy platform to guide all aspects of construction

During the Yan'an period, the Communist Party of China successively issued a number of constitutions, including the Ten Outlines for the War of Resistance Against Japan and the Nation (1937), the Shaanxi-Gansu-Ningxia Border Area Policy for the War of Resistance Against Japan (1938), and the Shaanxi-Gansu-Ningxia Border Area Governance Program (1941). Sex file. Although these documents have different names, they all have the highest political status and stipulate that the Communist Party of China should unite and lead the various classes, parties, and the general public in the border region to resist Japan, confirming the organizational principles and guarantees of the "three, three systems" government. Measures to protect the human rights of the anti-Japanese people, advance land reform, and strengthen cultural and educational policies have played a role of constitutional governance.

On May 1, 1941, the "Government Program for the Shaanxi-Gansu-Ningxia Border Region", which was proposed by the Central Bureau of the Border Region and approved by the Central Political Bureau, stated in the general section: "To further strengthen the border region and develop anti-Japanese political, economic, and cultural construction, Da insisted on the purpose of enhancing the welfare of the people through the long-term anti-Japanese war. The Central Bureau of the Communist Party of China ’s Shaanxi-Gansu-Ningxia Border Region proposed the following anti-Japanese national united front principles to the two million people in our border region on the occasion of the election of the Second Senate of the Border Region. The policy programme, such as when Communist Party members are elected as administrative staff, will be resolutely implemented in accordance with this programme. "

Regarding the authority of the border area's policy program, the leaders of the border area explained: "Our party is a party that agrees with words and deeds. The program we propose to the border area and the people of the country is the solemn promise of the party, and the implementation of the party's promise is sacred to every party member. Whoever violates this point will destroy the party's prestige and violate the party's discipline; the party's cadres and each party member must effectively implement the decision of the Central Bureau of the Border Region to issue a new policy program, first in the party Conduct in-depth and extensive research and discussion. All party members and cadres with considerable education should study and read the program item by item, sentence by sentence, and word by word. Every party member who is illiterate or less literate should take it as an example. Textbook. Remember: if the party members do n’t understand the program themselves, they ca n’t say how to seriously promote and implement the program. Only by seriously promoting and implementing the program can there be victory in the Chinese revolution. ”

With the development of the situation, the Chinese Communist Party represented by Mao Zedong has further thought about the nature of the political power and the form of organization. In his speech at the inaugural meeting of the Constitutional Promotion Association of Yan'an on February 20, 1940, Mao Zedong clearly stated the policy ideas of the Chinese Communists: "New democracy politics is a new democracy constitutionalism. It is not old, past The so-called democratic politics of the old, European and American, bourgeois dictatorship; at the same time, it is not the Soviet-style, democratic politics of the proletarian dictatorship. "In the" New Democracy "published in the same year, Mao Zedong pointed out:" New democracy The political system of an ideological country is a democratic republic under the leadership of the proletariat against all imperialist and anti-feudal people's dictatorships. The people's congress system is implemented, and governments are elected by people's congresses at all levels. -democratic centralism."

Proceeding from the actual situation in the border area, the anti-Japanese democratic regime will be promoted towards the direction of legalization

In 1938, the Shaanxi-Gansu-Ningxia Border Region successively established statute research committees, local regulations drafting committees, border area legal system committees, statute review committees, and other institutions, laying a foundation for the Shaanxi-Gansu-Ningxia Border Region government to establish a chapter and carry out large-scale legislative activities. After the "three-three system" government was established, the legislatures at all levels in the border region exercised their legislative power as a centralized legislature, marking that the legislative activities of the border region have entered a normal operating track.

In particular, in terms of the institutionalization of the party's leadership, the "Decision on Unifying the Party's Leadership in the Anti-Japanese Base Areas and Adjusting the Relations Among Organizations" (also known as the "September 1st Decision") issued by the CPC Central Committee on September 1, 1942. : "Every base has a unified party committee (central bureau, branch bureau, district party committee, district committee) that leads all parties. Therefore, the central representative office (central bureau, branch bureau) and party committees at all levels (district party committee, district committee) ) Is the supreme leading body in each region, unifies the leadership of party, government, military, and civilian work in various regions. Party committees at all levels should not only be party committees that lead local work, but should be the unified leadership of the party, government, military, and civilians in the region ... The work of party committees at all levels should take care of all aspects, discuss and inspect all aspects of party, government, military, and civilian work, and should not be limited to local work. "" The unity of party leadership is manifested in the party, government, military, and civilian organizations at the same level. In terms of interrelationships, another aspect is the relationship between superiors and subordinates. "From the perspective of party authority, the establishment of the party's" unified "leadership system established the organization of the Communist Party of China. The authority broke the current situation of wartime bases, the party and the government were not separated, the party and society relations were chaotic, and there was friction between the army and the locality. The subordinates did not respect the status quo of independence of the superiors, which further established the party's authority. .

At the National Party Congress in 1937, Mao Zedong carefully elaborated on the tasks of the Communist Party of China during the War of Resistance Against Japan. In his speech "Struggling for millions of people to enter the Anti-Japanese National United Front," Mao Zedong stated, Power, rely on the implementation of the party's democratic centralism to motivate the whole party. During the reactionary and civil war periods, the centralization system performed more. In the new period, the centralization system should be closely linked to the democratic system. With the implementation of the democratic system, the whole The enthusiasm of the party. Use the enthusiasm of the whole party to exercise a large number of cadres, clean up the remnants of the sectarian ideas, and unite the entire party like steel. The seven major party constitutions stipulated in the general outline that "the Communist Party of China is organized according to democratic centralism. Is a unified fighting organization linked by disciplines that we consciously perform. "Also in Chapters 14 and 22 of the Party's organizational structure in Chapter II, the basic conditions and implementation of democratic centralism are specified. Provisions.

In addition to democratic centralism, a set of daily management systems for cadres was established during this period, laying the foundation for the standardization of political parties and political power. Such as in the education and training of cadres. The Central Committee has successively issued the "Directives of the CPC Central Committee on Cadre Learning", "Instructions of the CPC Central Committee on Handling Party Schools", and "Directives of the CPC Central Committee on In-service Cadre Education", the importance of cadre education and training, the targets of cadre education and training, and The institution has made specific regulations, and has specifically established the Ministry of Cadre Education as the cadre education and training institution in the National Anti-Japanese Base Areas. In terms of cadre deployment and exchanges, the Central Military Commission issued the "Instructions on the Implementation of Exchanges between Force Cadres" and "Notice on the Regulations for the Movement of Cadres of the Northwest Bureau Organization Department" on February 21, 1943, promoting communication between cadres above and below, forward and backward Communication, military and local exchanges. Regarding cadre evaluation and rewards and punishments, the Shaanxi-Gansu-Ningxia Border Region Government has successively issued the "Interim Regulations on the Appointment of Cadres at All Levels in Shaanxi-Gansu-Ningxia Border Region" and "Temporary Regulations on the Reward and Punishment of Governmental Cadres at All Levels in Shaanxi-Gansu-Ningxia Border Region". In terms of intra-party supervision, the "Shanghai-Gansu-Ningxia Border District Administrative Supervisory Commissioner's Organizational Provisional Regulations", the "Shaanxi-Gansu-Ningxia Border District County / Regional Offices' Organizational Provisional Regulations", and "Orders for Seriously Handling Cases of People's Accusations against Cadres" have been issued. A relatively complete cadre supervision system.

In short, the Yan'an period is not only a period of rapid organizational development, but also a critical period for the establishment of a sound system and its formalization. The standardized construction of the Chinese Communist Party's governance during the Yan'an period laid a successful institutional foundation for its overall victory and national governance.