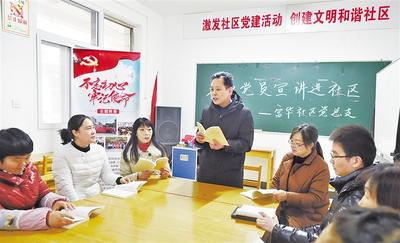 On December 24th, the incumbent party members of the Provincial Academy of Social Sciences took party classes for the party members of the provincial capital Fuhua Community. Since the Provincial Academy of Social Sciences organized party members to carry out the "double check-in" work in the Fuhua community, it has formulated a list of needs, identified joint construction projects, established an activity mechanism, and actively participated in community services and organized community building through the organization of theme activities and volunteer services. Contribute. Photo by reporter Zhao Jie

With strict control and love, grassroots party members and cadres are constantly improving their abilities and qualities, making every party member a vanguard banner;

Classified management and coordinated advancement, and the overall improvement in the quality of grassroots party building in all areas have made each grassroots party organization a strong battle fortress.

Grass-roots party organizations and party members are the foundation of the party's governance and the source of strength. Over the past year, under the guidance of Xi Jinping's new era of socialist ideas with Chinese characteristics, General Secretary of our province has implemented internship of important instructions for work in Hebei and the CPC Central Committee ’s decision-making deployment, combined with the theme of “not forgetting the original heart and remembering the mission”, Grasping the grassroots and laying the foundation as a long-term strategy and a solid strategy, vigorously strengthen the grass-roots party organization and the construction of party members, grass-roots party organizations have significantly strengthened their role in various industries, and the party's banner fluttered at the grassroots positions.

"The road has been repaired, the lights are on, and the village collective has income." Speaking of the recent changes in Luzhuang Village, Shengying Town, Guangping County, Handan City, the villager Lu Fengying couldn't help laughing.

Luzhuang Village was once a well-known "poor village" due to the aging of village cadres and insufficient endogenous motivation. Today, in just a few months, the village has changed from "poor" to "rich".

The transformation began with the grassroots party building special rectification work carried out this year under the theme of “Do n’t forget your original heart and keep your mission in mind”. Aiming at the weakness and dissolution of the party organization in the school, the town party committee has selected strong “leaders”, identified university student party members as the village party branch secretary, and assigned the village “two committees” to allow cadres to be pioneers and lead by example. Focusing on the development and growth of the collective economy, the village launched the "Double Action" of collective assets and contracts in the village, clearing over 80 acres of collective arable land, developing breeding projects and strawberry planting, putting the village on the fast track to development.

The elder who seeks wood must solidify its roots. In the theme education, the Provincial Party Committee regards the rectification of weak and scattered grass-roots party organizations as the top priority of grassroots party building. It insists that there is no proportion and should be exhausted. "During the trial", the county and township party committee secretary "signed the endorsement" to identify the weak and scattered grass-roots party organizations without leaking out; focus on solving the problem of lax education and management of party members, and solidly promote the development of party members' violations of laws and disciplines. Directly reach the village party branch that has not developed party members for more than 3 years to solve the problem of long-term non-development of party members.

The weakness and fragmentation of grass-roots party organizations not only exposes the problems of party members and cadres in terms of ideology, work style, and working methods, but also is closely related to insufficient attention by higher-level party organizations, insufficient guidance, lack of supervision, and failure to find and solve problems in a timely manner. In this regard, our province strives to rectify the lack of responsibility for the party's main body of party building, and firmly grasps the implementation of the "bull nose" of the party's responsibility for building the party at the grassroots level.

-Strictly carry out appraisal and evaluation of party building at the grassroots level. Focus on improving the method, unannounced unannounced visits, fixed-point anatomy before the meeting, air-drying indicators at the meeting, the original report of the problem, the name of the report of criticism, the party committee (party group) secretary on-site analysis.

During this time, Li Zhigang, secretary of the Party branch of Liying Village and director of the village committee in Junan County, Tangshan City, was full of smiles. "The village has made another big business. The customer bought 60 North American begonias and 200 purple-leaf bird cherry saplings in one go. The village collective has nearly 20,000 yuan accounted for."

It is hard to imagine that the former Liying Village was a famous "poor village" and "random village" in Shilibaxiang. "No income, disagreement, the guy is hard to find."

How do people unite? How does the village develop? These questions test the village party branch secretary Li Zhigang. He believes that the key to opening the question mark is to do a good job of party building, do a good job of the branch, and bring a team, build a team that dares to meet tough, capable officers, take the masses, and do it for the masses Look. "Thinking about one's heart can bring strength to one place. People's hearts are unified, and any difficulty can be overcome."

The train runs fast, thanks to the headband. From the beginning of his post, Li Zhigang gave the village cadres a "five chapters of the law": if you ca n’t eat, do n’t give gifts, do things justice, relatives and friends do n’t touch it, and guests pay for themselves. Under the leadership of the village cadres, the party members in the village are of high quality, and the night patrols have been unimpeded for many years.

Only an excellent grass-roots party organization can provide "excellent" services to the masses. Since the beginning of this year, our province has continued to improve the ability and quality of grass-roots party members and cadres as an important part of grassroots party building, and has always been working tirelessly.

This year, the combat effectiveness of party members and cadres has become increasingly high-

At the same time, we focus on strengthening the education and training of party members and cadres, deepening the "10,000 people demonstration training" project for grass-roots cadres, and holding a total of 119 training courses in 13 thematic classes in five categories throughout the year, training 19,000 grass-roots cadres; expanding the development space and selecting the best 336 village (community) party organization secretaries were selected to enter the township (street) civil service ranks, and trees were selected in recognition of the third batch of "Thousands of Good Clerks" 212 people.

This year, the grassroots basic guarantee was effectively consolidated--

Earnestly implement the requirements of the provincial party committee for “one mention, two increase, and one clear”, and substantially increase the village organization operation guarantee funds and village cadre remuneration and treatment standards. This year, the province's financial institutions at all levels invested 9.03 billion yuan in village organization operation guarantee funds, and the village average was 18.3 Ten thousand yuan, the provincial financial investment in village-level organization operation guarantee funds doubled compared to 2014. Strictly implement the funding guarantee for urban communities, implement community party and mass service centers to meet key targets, and include 397 community party organization secretaries into the establishment management. To support and strengthen the village-level collective economy, the provincial level selects 1,500 villages for key support each year, and each village invests no less than 500,000 yuan. This year, 7048 villages with collective economic blanks have been eliminated. The proportion of villages with collective economic income in the province has reached 95.3%.

"A year ago, no leaves were swept in the courtyard, the garbage was not cleaned for a few days, and private cars were parked randomly." Li Xiuqin, a resident who has lived in the Qingsan community for 40 years, quickly said, "Now, not only the community has a good environment As a result, our cultural life has also been enriched. "

In May of this year, the provincial authorities directly launched the “double report” work, that is, the party organizations of the provincial authorities report to the streets of the residents, and incumbent party members report to the communities where they live. Since the launch of the "double check-in" work, all units in the districts have exerted their expertise to meet the needs of the masses. Some provide paired escort services for elderly people living alone, some provide artistic guidance for art and calligraphy enthusiasts, some carry out public welfare lectures, policy consultations, medical free consultations ...

Party building at the grassroots level involves a wide range of issues, complicated situations, new problems and difficulties. How to innovate the system and mechanism to open up the "last mile" to serve the grassroots?

Earlier this year, our province printed and issued the "Implementation Plan for the Activity of" Improving the Quality of Grassroots Party Construction Years ", which clarified eight rural, street communities, state-owned enterprises, universities, institutions, non-public enterprises and social organizations, public hospitals, and primary and secondary schools. In each field, 10 quality improvement standards for grassroots party organizations, accelerate the standardization and standardization of party branches, and comprehensively improve the quality and level of grassroots party building work.

Focus on the problems in various fields and solve them with practical tips. In cities, improve the four-level joint responsibility system for cities, districts, streets, and communities, clarify job responsibilities step by step, and establish a party building joint conference system step by step. The party organization secretary is the person in charge. , Promoted "whistle report", created "red property", and established a new pattern of party building at the grassroots level in the city; in rural areas, efforts were made to promote the upgrading of rural party organization positions and implement village supervision committees. At present, all administrative villages in the province are established and sound The village supervision committee has trained a total of 39,000 directors of village supervision committees and 159,000 members of village supervision committees. In state-owned enterprises, starting from rationalizing the system and improving the institutional mechanism, they have promoted the implementation of 30 key tasks of party building in state-owned enterprises. Efforts should be made to solve the problem of "uppering heat, lowering temperature, and lowering heat" in party building work, and to promote the strict implementation of the party's requirements to be implemented in colleges and universities ...

The foundation is solid and rock solid. An innovative and pragmatic measure that strengthens the foundation and strengthens the grassroots fortress, activates the end of the organization, and consolidates the foundation of governance. Today, the province's 197,000 grass-roots party organizations are becoming 197,000 fighting fortresses, and 4.877 million party members are becoming advanced models for entrepreneurship of 4.877 million officers. They are closely linking the party's flesh-and-blood with the people and building a strong economic province, The majestic strength of the beautiful Hebei.